Philadelphia, known colloquially as Philly, is the largest city in the U.S state and Commonwealth of  Pennsylvania and the sixth-most populous U.S. city, with a 2018 census-estimated population of 1,584,138. Since 1854 the city has been coterminous with Philadelphia Country the most populous country. in Pennsylvania and the urban core of the eight-largest U.S metropolitan statistical area with over 6 million residents as of 2017.Philadelphia is also the economic and cultural anchor of the greater Delaware Valley. located along the lower Delaware and Schuylkill Rivers, within the Northeast megalopolis. The Delaware Valley's population of 7.2 million ranks it as the eight largest combined statistical area in the Unite States.

Tourist attractions like the beautiful Benjamin Franklyn Bridge from Delaware into Pennsylvania whererupon we will arrive in the city of Philadelphia, birthplace of the United States of America

We will see the Liberty Bell and view Liberty Hall along with the original site of the Old Congress. We will then visit the Yoni Netanyahu Monument before continuing on to the famous “Rocky-Steps,” located on the beautiful Benjamin Franklin Boulevard. We then travel West to the Amish-Area where we will essentially go back in time as we witness a community living as it did 300 years ago. We will see the Amish lifestyle like the horse buggies and the beautiful old fashioned farms. We will make a stop at a beautiful local market where we can find Amish goods and even see Amish women making jam! Our final stop will be the Hershey Chocolate Factory where we will view a simulation of the process used to make the Chocolate. We will begin making our way back to New York City in the afternoon and will arrive sometime in the evening. 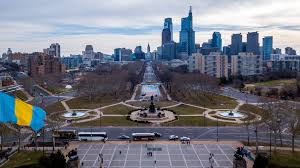